Healing the poor denuded souls of the West is big business over here. In Goa, I sat in one restaurant and counted the adverts for yoga, therapies and relaxation etc on offer, just within eyesight: Sushana Yoga, Bhakti Yoga, Aum Yoga, Reiki Teach and Healing Yoga, Brahmani Yoga, Accelerated Healing, the Meditation Healing Centre, Eco-Retreats, Spiritual Tattoo Arts, Ayurvedic massage, even Swedish Massage (which I did consider briefly, purely on investigative grounds). All are aimed unerringly at Western visitors.

Even in Mysore, where I am spending a few days, the same pattern emerges – the hotel that I am in contains five over-sized middle-aged American Yoga-Bunnies with fixed grins, a Spanish conquistador masquerading as a Yoga Teacher in an attempt to snare the innocent young girls with his smooth mantras, an Irish-American over here seeking cheap dental treatment (not such a bad idea in fact), and a 22-year-old American boy who appears in a permanent trance, is annoyingly flexible, and arises at 4am every morning to commence his meditation. Sanity comes in the form of Swiss-Kiwis “Mars” and “Clouds” (real names Marcel and Claudia, and with an equally healthy skepticism when it comes to the spell of the Mantra) and Swiss Hanna, who have been great travel companions.

I fully intend to get into the meditative swing of things at some point by visiting an Ashram, but I suspect that the choice of venue is all. At the moment, I’m still finding deep sleep to be the perfect form of meditation.

For sustenance, the aforementioned Yoga-Bunnies (or Yoga-Rabbits really) persist in eating 3-minute noodles every night. It is astonishing that they come to India and miss out on the food experience, which has been particularly good in Mysore. Meanwhile Mars, Clouds, Hanna and I have been eating like kings every night for under 100 rupees (less than 2 quid) in a wonderful restaurant, off the tourist trail. If it’s got Indians eating in it, it’s normally a good bet, and the Green Leaf is packed to the gunnels.

Despite the Y-Rs prominent display of over-large knickers on the balconies of the hotel, Mysore has been great. The palace is remarkable, the people are justifiably proud of their city (and consequently less pushy). Last night, looking out over the city from a balcony after a game of Rummy, something seemed different. It was the streetlamps. Mysore has streetlamps. And the occasional pavement. And even traffic lights. 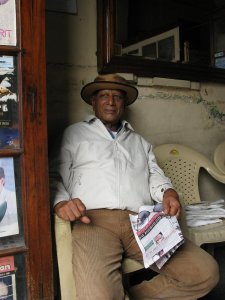 One of the proudest Mysoreans I have met is Krishne Gowda. Krishne was relaxing in his friend’s shop over a glass of chai as I walked past. I was struck by his open smile so I opened a conversation. It transpired that he was the ex-Curator of the Mysore Zoo (1964-1996), and had entertained the Edinburgh Zoo curator in Mysore in the 80s, had trained in Hamburg, and had visited Whipsnade on numerous occasions. He developed a specialism in breeding elephants and rhinocerii. He had a record four species of the latter in Mysore Zoo at one point, elevating it to dizzy zoological heights of fame. A fascinating man, and a subsequent visit to the excellent zoo was well worth it.