Doing headstands – in my sleep

At the halfway point in the Yoga Teachers Course, I can happily report only minor niggling physical injuries, a very healthy mental state, and a happy soul.

The progress you can make from 4 hours of Yoga Asanas a day is amazing – a solid and sustained headstand was something that felt a country mile away at the beginning of the course, but now feels, well if not exactly natural, at least doable. (Due to doubters after the original post, I have now included a picture. The pinkness in the face is sunburn, not over-exertion I can assure you).

I’ve also realised why they wear loose trousers. I am discovering muscles I’m not sure even my mother knows that I have.

The teachers keep pushing, and I keep pulling – generally they are sensible enough to avoid touching me while I am in the (in)delicate position of trying to put my ankle behind my head. That one will take a little more time.

In an Ashram of 56-bed dormitories, I once gain fell on my feet for accommodation. I ended up in the small 12-bed “Vishnu” dorm with 9 Malayalam guys from Kerala, 1 delightful Delhi-ite, and a Swiss guy. Despite a slightly rocky start – see below – we all get on fabulously, to the extent that I ended up doing a temple dance on stage with the Malayalam guys (I call them my Mallyaly army) in last night’s weekly “Talent Show”. (The talent shows will be the subject of a separate post at some stage. National stereotypes have been coming to the fore in all sorts of very amusing ways).

So, that rocky start… Naturally, after the long induction on the first night, sleep came pretty easily to the Vishnu Dormitory, at the allotted time of 10.30. I entered the halls of slumber looking forward to some quality shut-eye before the wake-up bell at 5.20. Given the punishing schedule, sleep is always at a premium.

The Mobile phone alarm that went off at 3.45am was, therefore, not exactly welcome. “Patience, Duff, patience” I told myself, recalling the slightly frightening response from one of the staff the previous night when I enquired about the course: “Well Andy, this course is tough… Eventually something is going to get your ego – it will be the most unexpected thing – but something will get you in the end.” Was this my first test?

After the seventh repeat of the alarm at 4.06, I decided enough was enough, and stormed across to the bed concerned making my views known in the finest English vernacular I could dredge from my weary body, before flopping back into bed for a vital further 75 minutes. There was an eerie silence in the room as we all got up later – I was clearly not the only one who had suffered.

The second night came, and again sleep descended quickly in the evening. And again, a phone alarm at 4am – this time it was turned off and replaced with a loud shower, the clattering around of someone getting dressed, lights on, and then a strange rattling sound for the next 20 minutes. I shoved my head determinedly under the pillow and snaffled some precious remaining minutes, calming my rising blood pressure the best I could.

“This has GOT to stop,” I said to the biggest guy in the dorm.

“I know, man – but he doesn’t speak any English – but if he does it again we’ll beat him up” he said with a knowing laugh. 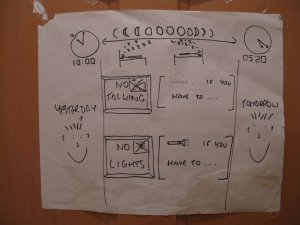 I spent most of the third morning’s Asana class thinking about how to resolve the worsening situation. Just as I entered the delicate final stages of the shoulderstand, it came to me – taking my inspiration from the Kerala police motto plastered on the side of their cop-cars (“Kerala Police – Polite but Firm”) I decided to draw a picture (see photo) depicting the requirement for silence and darkness between 10pm and 5.20am to restore some order.

I was just preparing to post my notice as we turned in for the third night, when a gentle “Ahem” behind me. “Yes?” I enquired, politely (but firmly). It was the big guy again. “Erm, man, it’s awkward… you see… he’s a Pujahri – it’s part of his duty to do pujah (worship) to Parvati at 4am every morning… that rattling sound is him passing beads through his brass bowl – it’s part of his ritual…”

This was tricky. I found myself at the sharp end of cultural sensitivity. I had a decision to make.

Given that the Asanas practise was starting to bite, the urgent need for sleep won the day. I went ahead and posted the picture. Now it was a case of wait and see.

5.20 the following morning came and incredibly I found myself fast asleep. It had worked! The result has been subsequent love, peace and spiritual harmony in the dormitory and firm friendships. I am now addressed as “Chetan” – Older Brother – by the beaming Pujahri (Jaylal), and reply equally cheerily with “Anir” – Younger Brother. Another of the boys has taken to calling me “Alia” – Brother-in-Law (although I am insisting on seeing his sister first). A couple of the lads even sidled up later in the day to say they were secretly rather relieved – it wasn’t something that would have been easy for them to do. I could not ask for better dorm-mates.

Time is precious on the day off, so I will leave it there today. From the hilarious flatulence incident in yesterday’s meditation to the stories of Astral travelling over tea, there is more, much more, to say. But that will all have to wait. I have another day off on Friday and will post again then.

2 responses to “Doing headstands – in my sleep”