“A yoga siromani I am” 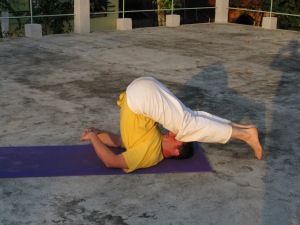 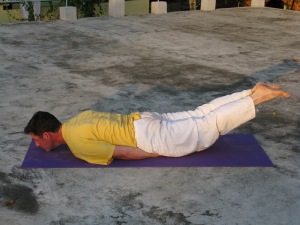 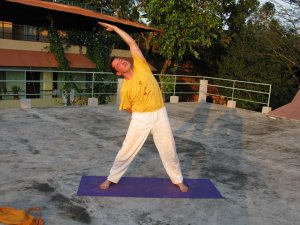 After over 60 hours of chanting, 75 hours of Yoga Asanas, and innumerable Vedantic Philosophy lessons and discussions, it’s over.

It will take a few weeks to write up some of the experiences here in full, which came thick and fast, particularly in the final week. We finally graduated on Saturday night after a 3 hour exam in the morning.

The three final lessons on Thursday epitomised the Ashram in all its colours and shades.

Midday brought a final lesson from the delightful 80-year-old Mr Nagaraj, a man with an unquenchable thirst for the teachings of Lord Krishna in the Bhagavad Gita. Even if the lessons dragged a bit (they included group chanting of selected verses of the sacred text), Mr Nagaraj had a child-like and infectious sense of humour. His favourite quote: “WAKE UP FROM YOU SIESTA! THE VERSE WILL MAKE YOU COME ALIVE! TIME… IS OUR ENEMY NUMBER ONE!”

He was sent off with an emotional farewell, reminiscent of the “Captain my Captain” scene in the film Dead Poets Society, as one by one we rose from our creaking knees to give him a standing ovation. (There was an underlying note of relief that it was all over, but it was a special moment).

At 2pm, the big boss Swami Mahaadevananda took to the stage for his final lecture on Vedantic Philosophy. A large and powerful Italian, now head of all the Sivananda ashrams in India, Swami M had delighted in provoking, cajoling and stimulating us over 4 weeks with a call to arms: “control your ‘stupid little minds’, realise the self and achieve happiness”. This grated with some Western sensibilities (including mine) for the first couple of weeks. but ultimately fitted into a pattern of thought and beliefs that is fascinating in its comprehensiveness.

His final lecture was as provocative as ever. There was no let-up in discipline as he sent one student off to change into uniform and berated others for slack seating posture; and the lecture itself was a strong statement of his belief in the corruption of the Western way of life. He is a passionate and deliberately contentious figure and one that many warmed to over the course.

By 4pm, we were in the hands of our Asana (physical practice) teacher, Mani. His humour and passion had stretched and squeezed bodies in varying degrees, achieving remarkable transformation in some, and inspiring unquestioning adoration from others.

His final class was “meditative”, meaning that we were to hold each pose for up to 7 minutes in absolute silence. It was an amazing and emotional experience.

By the end of the class the raucous send-off we wanted to give him was suddenly deeply inappropriate. His final act of prostration before the class taught many of us more about humility than any amount of theory could have done.

Despite Swami Mahaadevananda’s exhortation to spend the time chanting the mantra “I will not worry about exams” there was, unsurprisingly, oodles of frantic revision over the Friday night. The collective “stupid little minds” whirred away as we all attempted to cram in information at the last minute. (Many people were a little rusty on exam technique, not least the delightful Doctor Phillippe from Switzerland who, in his mid-60s now, had last taken an exam in 1975).

For many, sleep was fitful – and it seemed deeply appropriate that my Pujahri friend Jaylaal’s alarm should once again go off at 3.15am as if to remind me that a level of temper control is one of the lessons I will take from the Ashram.

The exam itself was easier than expected for most of us. Twenty-four packed 17-hour-days had established facts deep in our memory cassettes, waiting for regurgitation with a little bit of tonsil-tickling.

A de-mob happy crowd attended the graduation ceremony and a final talent show, before most headed to the beach. (The shop-keepers have confirmed that the economies of beach-towns Varkala and Kovalam receive a welcome boost at the end of each Teacher Training Course).

I head to Delhi tomorrow (Thursday) then into Rajashtan. I will post again soon.

One response to ““A yoga siromani I am””