I arrived in Varanasi (a.k.a. Benares, Kashi etc) on Wednesday morning, from Delhi. There are many stories to tell from 2 days of random meetings in Delhi, but since then I have had two intriguing and contrasting days in the City of Light.

We were travelling on a cycle rickshaw in the University area when I saw the sign out of the corner of my eye.

It was 4.15pm. Despite not knowing anything about “Smile Pinki” (other than that it was the other Indian Oscar winner – a documentary), the temptation to follow our noses was too great. We pulled over and joined the crowds heading for the University’s Medical Department Auditorium.

At the front of the stage, 1 Indian woman and 6 Indian men, one of them with a small Golden Oscar statuette in front of him, sat behind tables.

The 300 seats were taken. We found space and perched in an aisle. In no time, there were about 400 in the hall, crammed into every spare space.

We were still unaware of what we had stumbled upon. But as we listened to numerous laborious speeches, it dawned on us that we were witnessing the homecoming of the two main stars of the documentary, a surgeon Dr Subodh Kumar Singh and an anesthetist Dr AN Singh, fresh from their remarkable success at the Academy Awards.

The documentary deals with the Cleft Palate problem (more prevalent in India than most over countries in the world) and a remarkable project to deal with this at Benares University Hospital.

In rural areas of India, children born with Cleft Palate are seen as a curse on the mother, who will blame something like an Eclipse during pregnancy for the deformity. The children often end up ostracized by their communities, and even by their families.

The documentary follows the amazing work of the Smile Train Team at Benares University, as they go out into the surrounding rural areas to convince people that their children are not “monsters” and perform the operation on many children in one of their regular sessions. One of the real insights from the documentary was the practical reason behind the ostracising – prospects of marriages for Cleft Palate children hovered belween slim and nil.

Dr Subodh Kumar Singh was the last to take to the stage. He looked admiringly at the statuette in his hands.

“I feel privileged to be among the few in the world to grasp the Golden Lady!” he said with obvious emotion. “As a doctor, I never thought I would get a chance to walk on the Red Carpet!”No-one could begrudge him his pride. He gave thanks to every member of the teaching staff, auditorium staff, auditorium cleaning staff, family members, ancestors etc. It was a speech worthy of the famously emotional, if lengthy, Oscar monologues.

After an hour of speeches, the crowd were getting restless. When the compere suggested refreshments before the film started, a full-blown revolt seemed possible. The compere wisely took to the stage. “OK, we have heard you. The film starts now!” The 39-minute film (from a mere 100 hours of filming) did not disappoint. After an impassioned rendition of the Indian National Anthem, the famous Varanasi Ghats came into view. There were proud gasps from the crowd. It is a remarkable documentary with no narrated voice-over and no major production work. If you get a chance to see it, do so. 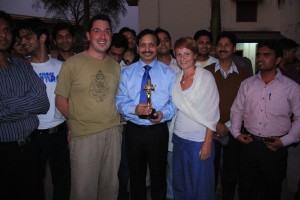 Despite the fact that we were clearly gatecrashers, we managed to wangle our way into the post-film refreshments, and meet the stars themselves. It was all, once again, most bizarre – but then I am starting to realize that is the norm in this country, and certainly for this trip.

Swimming with the Ashes

The contrast with the previous day was stark. I had arrived off a night train, and after a restorative Puri Masala, we headed down to the Ghats, which are the 88 separate series of wide steps leading down to the sacred river Ganges.

Hindus believe that if you die in Varanasi, you achieve instant Moksha (enlightenment). Most are cremated, with their ashes scattered on the river. Pregnant women and children are dumped directly into the river.

We sat by one of the Ghats where bodies are cremated by the side of the river in stacked piles of wood. An interminable stream of bodies were brought to the river wrapped in cloth, dipped in the Ganges, placed on the pyres, and set alight, while others were rowed out to the centre of the river for the final passage. The whole place is suffused with a strange combination of gentleness, spirituality, and matter-of-fact practicality in the face of death. When you believe that we are all spiritual beings merely on a human journey, death becomes a mere passage. There is no need for weeping or wailing – these are solemn, but not unhappy, occasions.

Look around and you notice the dogs defecating nearby, the children urinating in the street, the cows munching on the unidentified flotsam and jetsam at the edge of the river, the half burnt legs and arms being raked back into the pyres, even 21st century intrusions as mobile phones are answered at the side of cremations. It is also challenging to see people bathing in the same river where dead bodies and half-burnt body-parts are floating – the Hindus believe that bathing in the Ganges remits your sins. Strangely, none of this takes away from the essential spirituality of the place.

As a major Hindu religious site, the temples in Varanasi are patrolled by endless bored-looking policemen in the run up to the General Election. Uttar Pradesh will be a fascinating battle-state, and attracts colourful politicians like Mayawati and Mulayam Yadav, both promising endless money for investment in Varanasi and making impassioned denunciations of the other in a rivalry that stretches back more than 20 years.

But with a spiritual tradition that stretches back longer than any city in the world by some accounts, you get the feeling that the people of Varanasi can’t be bought. Somehow, Varanasi’s Oscar award, for a project imbued with such generosity of spirit, says so much more about this city and its potential future.

We head towards Agra tomorrow.