“Do you know the meaning of the term ‘Flâneur’?”

I confessed my ignorance to my travelling companion Martin, as we strolled aimlessly down the streets of Kashgar deciding what to do with the day.

“A ‘flâneur’ is a person who walks the city, without any particular plan, in order to experience it…” advised Martin, indulging me with knowledge gleaned from his recently completed Social and Political science degree. “Why don‘t we indulge in a bit of ‘flânerie’ for the day?”

I had been travelling with Martin and Becky for a few days. As Becky had been struck unexpectedly by the a bug, a spot of ‘flânerie’ seemed like a capital idea. We rapidly dispensed of the ever-present guide-books and set off in a vaguely Western direction through the streets of this fascinating city.

Our wanderings soon took us past the old Russian consulate, an incongruous late 19th century pile hidden behind a monstrous mid-20th century hotel. As we wandered around peering through locked windows, you could feel the spirit of the Great Game period when the old Imperial powers played out their political shenanigans throughout this region.

We sauntered on reaching the centre of the city, where the signs of China’s growing 21st century affluence lie side-by-side with more traditional emblems of the country’s 20th century history. Well-dressed Chinese hustle and bustle past branded stores with names like “Ben Cool” and “Playfox”, while not more than a few hundred yards away, a massive 24-metre high concrete statue of Chairman Mao waves imperiously down over the concrete mass of Renmin Square.

The real fun started when we left Chairman Mao behind as we ventured North again.

Life visibly slowed down. We were now in the very different Uighur part of town. The saloon cars were replaced by scooters, donkeys and carts. Men in shalwar qameez grilled kebabs in long thin braziers on the side of the road. Women, in chadors, burqas or headscarves walked purposefully through the streets in pairs. Many men just crouched on their heels pensively watching the world go by.

As we turned into one of the side streets, we could have been anywhere in south central Asia. Faces peered out of ornate turquoise and russet red doors lining the sun-dried adobe alleyways, as a couple of children torment a pair of tied-up cows, pelting them with pebbles.

We wandered further. It became clear that this was a deeply Muslim area, where small, well-used mosques provide a visceral reminder of the importance of religion in daily lives here.

We turned another corner, and discovered a young man sitting nervously in his wedding suit with his friends, waiting to be called into his future wife’s home.

Down a nearly alley a cook brewed a huge wedding stew in a metre-diameter wok. As is the custom, he insisted we eat so we perched on a bench hungrily shovelling some delicious rice into our mouths with our hands.

I suddenly noticed the cook staring at my watch. He rubbed his fingers together in the globally recognised commercial gesture. “How much?”

Decision time – this was a prized Casio F91-W, a retro throwback to my schooldays that I had picked up for a few rupees in Calcutta… could I part with it? It was an easy decision – the lessons on possessions from the Ashram kicked in – I handed it over. The rice had been payment enough.

I suddenly clicked. I recalled hearing that, in a gentle gesture of independent spirit, the local Uighur population run their clocks a couple of hours behind the official “Beijing time” (which is the only official zone for the whole of the country despite it‘s immense size). You can read about it here. This in fact makes enormous sense – it gets a bit strange when it’s still dark at 7am on a summer morning – and the evenings go on till midnight.

The watch transfer paid off too. Despite Martin’s Chinese (learnt from teaching English in Hunan), language was proving a serious impediment to communicating with the locals. Phone-calls were made; an English-speaking Uighur appeared from nowhere; and we were whisked into a house for a fascinating four-hour insight into what’s really going on here…

As the light faded, we headed back to the hostel. Our day of flânerie was drawing to a close… or was it?

As we ambled back at midnight, past locals defiantly enjoying their 10pm walks, we passed a motorbike-taxi. (For the uninitiated, this is a 6-person trailer pulled by a 125cc bike. Uncomfortable, Unsafe, and Unadvisable.)

High on life by this stage, we both waved cheerily at the middle-aged buxom lady in the back, calling out the familiar Uighur greeting “Yahximusiz!”

Within seconds we had been virtually kidnapped, bundled into the back of the open taxi by the ample arms, if not charms, of Buxom. It seemed only fitting to go with the flow.

It was a bizarre hour. As the driver tired, Martin was asked to drive (which he did). Numbers were exchanged. Frantic phone calls were made. We still had no idea where we were headed. 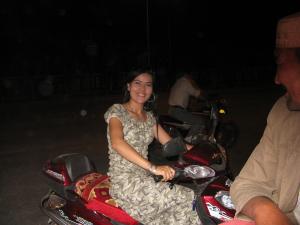 And then, suddenly, it all became clear. We were being taken to meet Buxom’s daughter. When she appeared out of the murky evening light – and turned out to be an astonishing Central Asian beauty (pictured) – it felt like we were being rewarded. (Flâneurially of course).

It had been another remarkable and memorable day. As I mentioned in a previous post, the Uighur Kashgar that provided us with such pleasure may not be around for much longer.

Tomorrow we will set off along the Southern Silk road.