East-west rivalries exist in many places – New York vs. LA; Sydney vs. Perth, and of course in Scotland, Edinburgh vs. Glasgow. In Scotland the differences were highlighted in the 80s when Glasgow adopted a burly double-entendre of a slogan designed to muscle it‘s way towards the top as Scotland‘s premier city (“Glasgow’s Miles Better”/”Glasgow Smiles Better“). Edinburgh’s pithy response was “Och yes, but Edinburgh’s slightly superior…””

There’s something of that going on between Calcutta and Delhi. The latter is a city on the make (see previous post) and definitely wants you to know it. There’s a sense of pushiness about the way the city portrays itself and acts.

Calcutta, on the other hand, doesn’t feel the need to push it’s case. It has a more languid feel to it with a rich Bengali cultural tradition, a coterie of important families still with some vestiges of power and influence, and some of the elitist Raj institutions having segwayed silkily into the hands of upper Bengali society.

I managed to sneak into one of those institutions, the Bengal Club, during my week there. No-one seemed the least bit fazed as I wandered through in cargo pants and a t-shirt asking for directions to the Reynolds Room on the first floor. 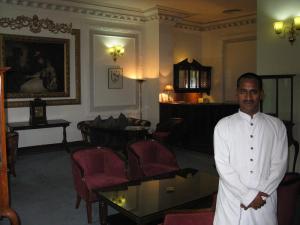 (I sat there for 30 minutes reading my book under the watchful eye of the fortune-teller in Reynolds‘ famous painting, completely undisturbed. Although the waiter was a little bemused).

As I left, I took a look at the notice board. Alongside an admonition form the President (apparently members have been giving tips staff, which is a strict no-no), there was a list of the latest additions to the reading material of the club. Blow the fiction list (Jack Higgins’ and John Grisham‘s latest, Sophie Kinsella’s Shopaholic & Baby, and Vikas Swarup’s Slumdog Millionaire) was the non-fiction list, which made quite interesting reading:

Each says something interesting about the concerns and interests of Club members. In particular, items 2 and 4 reminded me of the daily front-page drama in the newspapers here when I first arrived in November. The question of when Obama would call the Indian Prime Minister verged on a national obsession.

I enjoyed Calcutta immensely for many reasons, but the rising heat (and my consequent increasingly sweat-sodden state) made the siren-call of the “Queen of hill-stations” Darjeeling easy to cave in to.

My 16th Indian train journey brought me to the flats of West Bengal. From there, the famous Darjeeling toy-train creeps up 80km in distance and 6000 feet in height over 6 long hours, with some engineering contortions that are all the more spectacular for having been constructed in the 1921.

Slowly, everything morphs. Faces become more Nepalese/Tibetan in look; predominantly western clothing betrays both the shift towards a more Buddhist culture and the wealth that has come from tourism; and the weather, well, the weather becomes more… Scottish. The only thing that definitely didn’t change was the injudicious use of the horn. As the railway and the road vie with each other for space on precarious hill-side cuttings, our driver had no hesitation in honking for India. 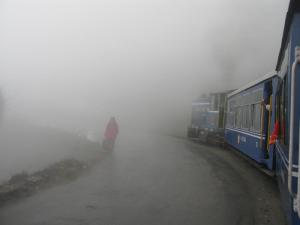 As we reached the height of Ben Nevis, we were suddenly hit by a thick pea-souper that would put the Bengal Club’s Mulligatawny to shame. With visibility down to a matter of yards, I was suddenly glad of that horn-use. The disappointment of missing out on the normally magnificent views was offset by the beauty of the drops of condensation clinging to the rhododendrons and pine trees along the route.

As the train pulled into Darjeeling station, the rain started to fall heavily. I recalled something in one of the guidebooks about rooms with coal fires. It was too good to pass up.

I therefore now write this from a room on the Planter’s Club of Darjeeling (room rate plus 50 rupees temporary membership, plus 120 rupees per bucket of coal), on my handy (tiny) new net-book computer, with a roaring fire in front of me. “Aye. No bad, pal…” as we say in Scotland.

There’s more to write about Calcutta in due course, including a meeting with a remarkable 80-year-old professor in Calcutta. You can read about him here. I was lucky enough to be given a tip that he might be an interesting interviewee, and so it proved.